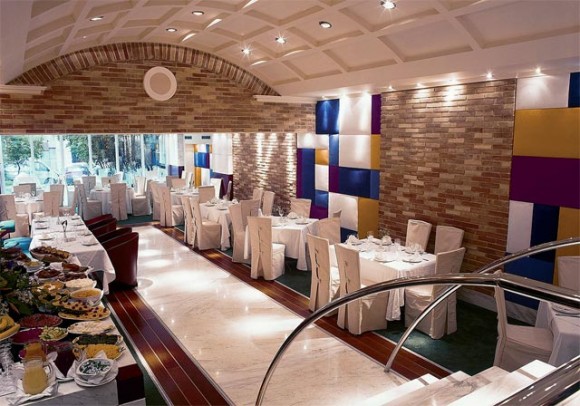 An interior shot of the Airotel Alexandros, which recently underwent a complete renovation program.

The Athens-based Airotel group renames its Riva unit after the group’s founder, Stratos Vasilikos. The Stratos Vasilikos Hotel on Mihalakopoulou, after being closed for a radical renovation program, will reopen in the early part of next year, in lots of time for the 2004 Games.

Alexander Vasilikos, who took over the group after the untimely death of the founder, follows closely in the footsteps of his father who insisted on upgrading and expansion programs for all hotels of the group. Airotel has three first-class units in Athens and a unit in Patras and on Evia.

Airotel founder, Stratos Vasilikos, after completing hotel studies in Switzerland, came to Athens and opened a travel office in the 1980s. He leased his first hotel in 1985, purchased controlling interest two years later and the rest is history. His basic game plan was to expand in sure, positive steps through almost total re-investment of profits. His son, Alexander, continues this basic philosophy.