Olympic Saga to Finish This Fall 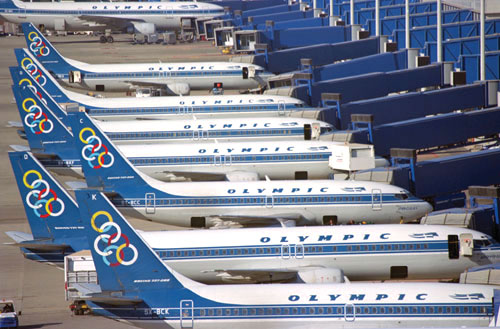 One way or another, the government here says a permanent solution to long-lasting problems with state-owned Olympic Airways will be found and implemented before this winter rolls in. So far, according to a business plan leaked to Greek media, a new company, to be named New Olympic Airways, would take over the present airline’s shrinking domestic and international routes.

The other parts of the old Olympic, including ground services and technical support, would be separated and left to survive or collapse on their own. Some profitable units, such as baggage handling, could forge contracts with the new airline.

Legislation to make the changes may well be passed by parliament shortly. In the meantime, however, government officials rush to find compromises with the airline’s strong trade unions.

The current plan reportedly seeks to cut the number of workers from nearly 5,000 to slightly fewer than 2,000, mostly through early retirement. Most workers oppose the cuts and loss of their public servant contracts.

One of the most difficult unions has succumbed but not before getting most of what it demanded. Transport Minister Christos Verelis announced last month that four months of negotiations with pilots had ended successfully.

Now the only union with which agreement has not been reached is that of flight attendants, but negotiations are said to be going well and could be completed as we go to press, which would allow the necessary legislation to be passed.

This is expected to split the old company, keeping only the flight division and adding current subsidiaries Olympic Aviation and Macedonian Airlines. The government had hoped to see the new airline to fly in September but October or November is more likely say trade professionals.

Among the basics of the deal with pilots is that about 140 of them who were to retire by the end of 2005 will go into early retirement.

Wages of pilots of the new airline will be in line with those in the market. These will be tied to an increase in their productivity and the company’s profits.

Work regulations (such as flight time) and other benefits will also be in line with other airlines.

Press reports say the new airline will employ only 420 of Olympic’s 640 pilots with the government enticing pilots to choose early retirement with severance payments that would reach as high as 620,000 euros.

But even without this kind of severance payment, the European Union may question the plan to divorce the air operations from the company’s debts. Already, the European Commission seeks repayment of 194 million euros in what it calls illegal government aid to the company. Greece claims the funding amounted to 41 million euros.

Meanwhile, David Learmount, operations editor at London-based Flight International magazine noted recently that Greece appears to be bucking a global trend of governments trying to get out of the costly airline business.