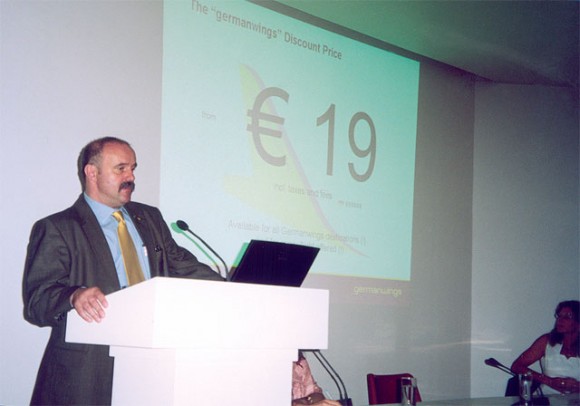 Germany’s low-cost carrier “germanwings” now flies out of Athens to Cologne four times a week and out of Thessaloniki three times a week with a ticket price of 19 euros, and that includes all taxes. That price, however, is for anywhere from 15 to 20% of all available seats. As the plane fills, the price increases in denominations of 10 euros.

Germanwings’ corporate communications senior vice president, Heinz Joachim Schottes, told a press conference here that the carrier uses a 142-seat Airbus A319 on the Athens route and that as the first group of seats are sold at 19 euros the second group goes for 29 euros. Once these are booked, the next group goes for 39 euros, and so on. “But no specific seats are booked,” he says. “As you board the plane you take the first seat that’s available.”

This pricing policy is the same on all flights to the carrier’s 21 European destinations. For example, a passenger could take a flight from Athens to Cologne for 19 euros, then from Cologne to Madrid for an additional 19 euros. The trick is to book well in advance.

Flights from Athens and Thessaloniki began on June 18. Bookings are done in Greek via the Internet (www.germanwings.com), but a call line is available (210 969 6416) at a cost of five euros per booking. Bookings at a travel agency carry a charge of seven euros plus a possible agency service charge as the airline does not pay commissions.

More than 90% of all the airline’s bookings are made and paid via the Internet, and all bookings must be in the name of the passenger that books and boards the plane. A last minute cancellation and a re-booking would cost a passenger an additional 25 euros. A full list of all the airline’s destinations is also available within the web site.

Mr. Schottes says the airline can offer such low prices because of its low costs. For example, he says the company’s offices in Cologne are no more than a container. Its turn-around time at all airports is one-half hour on average as pilots phone in orders for jet fuel and whatnot long before they reach the airport The company pays no commission fees and anything ordered on board must be paid for. He hastens to add that the on-board prices are cheap. A coffee goes for 1.50 euros. Germanwings is a subsidiary of “eurowings,” which is 25%-owned by Lufthansa.

Hellas Jet Up and Away Complete with Aegean Cooperation