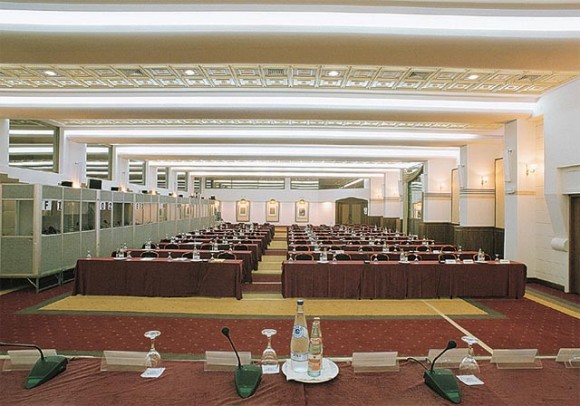 By mid 2005 the Athens Mitropolitiko Conference & Exhibition Center should be open and operating, says Takis Koumanis, president of the Association of Greek Organizers of Exhibitions and Conferences. He suggests that the total cost of the project would reach 146 million euros.

Mr. Koumanis, who is the chairman and managing director of Eurexpro, which is a member of the consortium Techniki Olympiaki-Eurexpro-Arup P. Ninos, was the highest bidder in a tender called to construct the above-mentioned conference and exhibition center at the old Athens Airport property. The consortium is now in final talks with Hellenic Tourism Properties to clear up some minor details and sign the relative contract, says Mr. Koumanis.

And after discussions held recently with Greece’s Public Works and Environment Minister, Vasso Papandreou, and Hellenic Tourism Properties managing director, Tassos Homenides, the consortium announced an agreement was reached whereby it would construct a deluxe hotel unit near the planned conference and exhibition center at the former Athens East Airport facilities.

Within the framework of the aforementioned, government agreed to increase the present construction coefficient there of 0.3 as presently it is considered prohibitive to erect a hotel unit, which is imperative to support the conference and exhibition center.

Eurexpro’s president adds that he expects the project to get underway by the end of this Fall. The exhibition and conference center, he says, would include the preservation of a part of the old Athens Airport because of its unique architectural construction. Once completed, the center will have the capacity to host up to 6,500 delegates. The main hall would host 3,500 delegates.

Separately, Mr. Koumanis says that the preliminaries for the formation of an Athens Convention Bureau are progressing. Already, he says, the Attica Hoteliers Union, our association, and the Hellenic Association of Professional Congress Organizers have joined to create the bureau’s by-laws.

With the above, the City of Athens opens new doors for tourism opportunities. With the recent modernization and the expansion of the hotel offer, and with the acquisition soon of a new, huge conference and exhibition center and its own Convention Bureau, the city will be ready to host some of the biggest and best conferences in the world. Athens will become a new international conference destination. One with a special identity and with great prospects for the years to come.

Up until recently, most visitors to Greece had the impression that ancient monuments, the Greek islands, and the sun and the sea monopolize the tourism activities of the country.

Greece is trying to change that picture, says government. It is an undertaking supported by investment in new tourism infrastructure works, and with changes that have taken place over the past years to utilize the rich cultural and physical richness of the country. Within this framework, new, alternate forms of tourism, which will give the real dimension of our country’s tourism market, has been the government’s basic priority in the planning and materialization of such a strategy.

As well, the emphasis given to development of the conference sector means increased profits, the probability of lengthening the Greek tourism season, and a mature conference product. At the same time, Greece will have the opportunity to offer a product that is different to that offered by other destinations, thanks to the country’s climate, hospitality, ancient culture and civilization, low costs and Greek gastronomy. A product that would combine the incentives of conference tourism with the recreation and relaxation of a vacation.