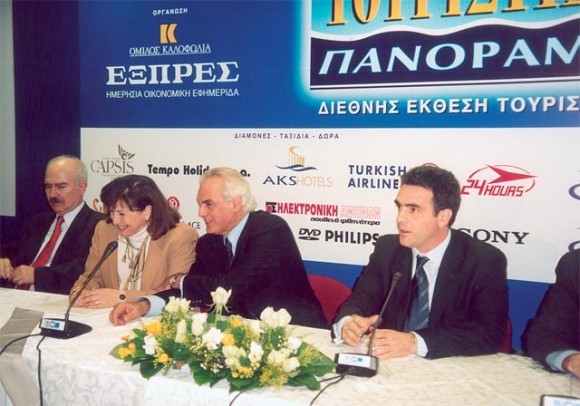 Development Minister Akis Tsohatzopoulos (center) inaugurated Panorama 2003. To his right is Anastasia Kanellopoulou, secretary general of the Ionian Island Prefecture, which was the honorary Greek destination this year, and to his left is Georgios Kalofolias of the Kalofolias Group, organizer of the fair.

In the midst of yet another international crisis, and a slow economy, Greeks took full advantage of this year’s Panorama tourism fair, the eighth, in hopes of finding some special deals and domestic holiday possibilities this year.Exhibitors said they were truly surprised at the numbers and the level of visitors to this year’s fair. Most had to get a special delivery of additional brochures and promotional material in order to satisfy demand.

The fair’s organizers, the Kalofolias Group, said the fair surpassed their initial expectations in every respect. “The exhibition welcomed more than 43,800 visitors and it hosted about 400 exhibition stands where there were some 600 exhibitors,” said the group. 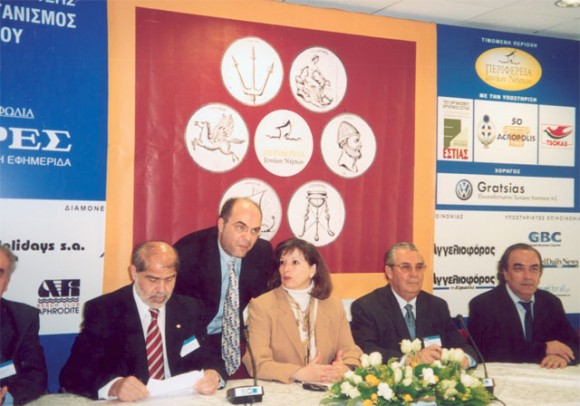 Journalist Spyros Zougris gives some final advice to Anastasia Kanellopoulou, secretary general of the Ionian Islands Prefecture, as the prefects from each island (Corfu, Kefalonia, Zachynthos, Lefkada, Ithaki, Paxos) ready to present the tourism highlights of their island.

Three side events at this year’s fair were of particular interest: the Kapa Research’s third annual survey on domestic tourism; a seminar on “Tourism in the International Environment, Forms of Cooperation;” and a professional presentation by the Ionian Island Prefecture, which was the honorary Greek destination at this year’s fair.

According to the domestic tourism survey, some 60% of Greek households said the present economic situation would affect their vacation plans this year. They said the situation would force them to take more economic holidays this year. But some 31% of those surveyed said they still planned on taking an average of three domestic trips this year – most during the summer, Easter and Christmas.

More than 84% of all surveyed said they would prefer to take their summer vacation, an average of two weeks, during July and August.

Overnights for the most part are split among hotels, rented rooms and summer homes, but the study saw an increase this year in the number of those preferring their summer home compared with other lodgings. 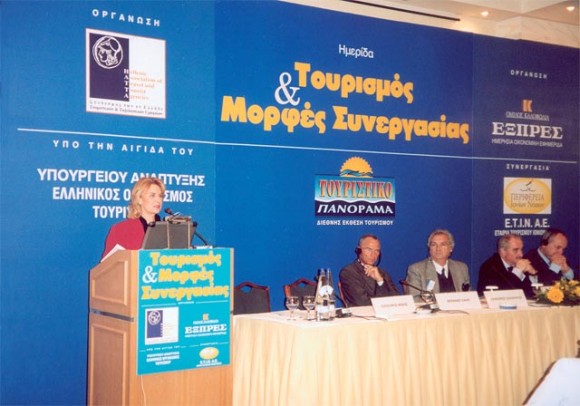 Carol Marriott of Best Western Greece during Panorama’s seminar on “Tourism in the International Environment, Forms of Cooperation” awarded Hellenic Association of Travel & Tourism Agents’ president, Yiannis Evangelou (third from left at table), for his untiring efforts to improve the Greek tourism profession.

The “Tourism in the International Environment, Forms of Cooperation,” which was organized by the Kalofolias Group and the Hellenic Association of Travel & Tourism Agents, included speakers from both home and abroad.

They all stressed the need to search for cooperation opportunities and to join forces within all areas of tourism activity. Only in this way, they said, can we increase the possibilities to develop Greek tourism and to reinforce its bases so as to meet the ever-increasing demands of the international marketplace.

They agreed that Greece was far behind in the area of cooperation, which means the country is not able to take advantage of present opportunities.

Its stand was not only extremely well run, but the destination also made sure it was heard. It held press dinners, island presentations and got deeply involved in every aspect of the fair, including taking part in the fair’s seminars. In all, an example all other prefectures should follow. 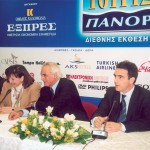 Development Minister Akis Tsohatzopoulos (center) inaugurated Panorama 2003. To his right is Anastasia Kanellopoulou, secretary general of the Ionian Island Prefecture, which was the honorary Greek destination this year, and to his left is Georgios Kalofolias of the Kalofolias Group, organizer of the fair. 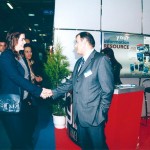 Athens Mayor Dora Bakoyianni greets GTP's Thanasis Cavdas during her round of the stands at this year's Panorama tourism fair. The mayor was one of the very few personalities that visited all of the fair's 393 stands, which hosted a total of 592 exhibitors. 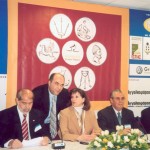 Journalist Spyros Zougris gives some final advice to Anastasia Kanellopoulou, secretary general of the Ionian Islands Prefecture, as the prefects from each island (Corfu, Kefalonia, Zachynthos, Lefkada, Ithaki, Paxos) ready to present the tourism highlights of their island. 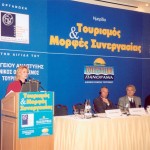 Carol Marriott of Best Western Greece during Panorama's seminar on "Tourism in the International Environment, Forms of Cooperation” awarded Hellenic Association of Travel & Tourism Agents' president, Yiannis Evangelou (third from left at table), for his untiring efforts to improve the Greek tourism profession. 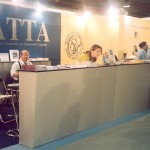 The experienced staff at the Hellenic Association of Travel & Tourism Agents' stand was kept busy throughout the entire four days of the fair. This marked the first year that the association was extremely active at such an event and took full advantage of it. Best Western Hotels Greece was co-sponsor of the stand. 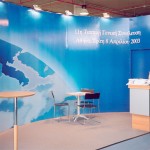 Looks can be deceiving. Association of Greek Tourism Enterprises' Eleni Glava was kept busy loading visitors with carrying bags and information, and with many more than expected tourism professionals who were interested in filling in application forms for membership. 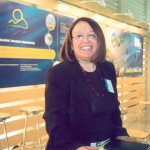 Hellenic Tourism Properties' communications and public relations officer, Eleni Delivorias, concentrated her promotion on the work being done by the company with Greece's spa operations, and in particular the development of Kaiafas Thermal Springs in Peloponnese. 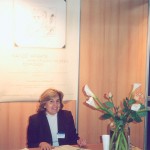 Georgia Bartzou, secretary general of the Greek Women in Tourism Association, informed visitors of the association's aims and its work underway in creating a unique Greek tourism museum. 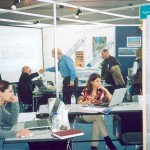 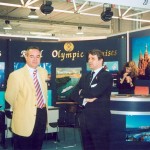 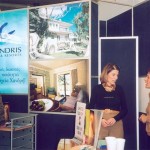 Chandris hotel group's Mantlen Madianou and Dimitra Lykourina said this appears to be a difficult year for the hotel industry, particularly resorts, but on the positive side the group's Metropolitan in Athens is holding its own. 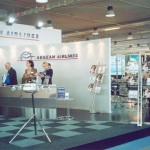 Aegean Airlines continues to build on its domestic and international routes. The private Greek carrier now handles almost half of all domestic passenger traffic. 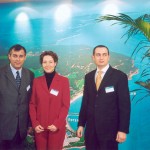 GTP's Thanasis Cavdas gets the lowdown on the new Asterias all-suites luxury hotel within the Sani Beach complex. Sani's Sofia Kalomenidou and Constantinos Zarkadas say the new unit opens May 15 and bookings are excellent, at least for July and August. 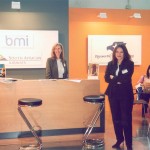 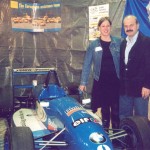 A very busy Roula Tamaresi of the Hellenic Association of Travel & Tourism Agents somehow found time to visit Lyssandros Tsilides of Altis, which handles all of the travel arrangements for ELPA events. 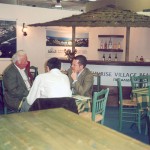 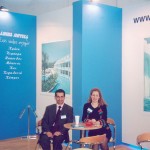 Louis Hotel's sales representative (Cyprus), Paris de Gregorian and Athens-based Maria Roumeliotis say they have to run hard this year to get bookings and so far their hard work has been rewarded. 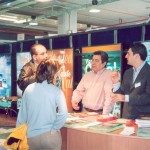 Anastasios Stavropoulos and Antonios Kaymenos of Hydra Travel had some very special packages to promote during the fair. They were also complimented on the quality and uniqueness of the ads in their current campaign. 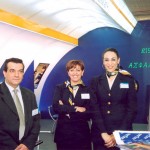 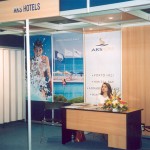 Photini Constantinou, sales and marketing manager for AKS Hotels, said she was pleasantly surprised at the number and level of visitors that passed by the stand to pick up information, especially considering the difficult period we are going through.