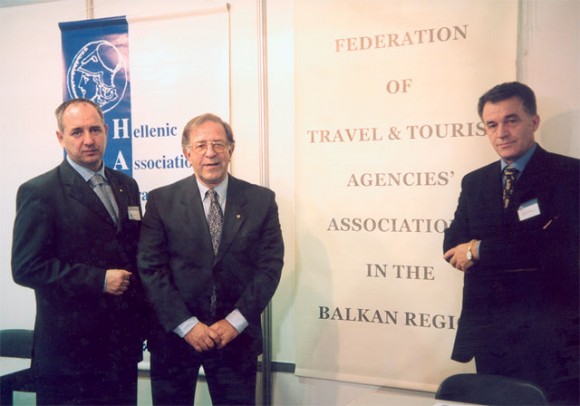 Branko Krasojevic, president of Yugoslav Travel Agencies Association (Serbia, Montenegro) with his executive board member, Arsenije Janevski, Radisav Stancovic, director of the Yugoslav Travel Agencies Association. All three took time to attend the signing ceremonies of the Balkan federation agreement and were on hand at the new federation’s stand for most of Panorama.

The Federation of Travel and Tourism Agencies Association in the Balkan Region is now a reality. During last month’s Tourism Panorama the final signatures from seven presidents of 10 Balkan country travel agency associations entered the cooperation agreement.

The instigator of the federation, Yiannis Evangelou, president of the Hellenic Association of Travel & Tourism Agents, says such a federation could play a major role in the development of tourism within the Balkan countries as well as assisting in increasing the number of intra-country visitors and visitors from third countries. Branko Krasojevic, president of Servia and Montenegro Travel Agents Association, and Dimitar Spirovski, president of the travel agents’ association in the Former Yugoslav Republic of Macedonia, told GTP they are truly dedicated to making this federation work. The first chore is to get working to create a new Balkan tourism product. Together, they said, we 10 countries have a unique tourism product that is common to us all.

The next step, they said, is to get airlines, railways and lodging units in the 10 countries to formulate a similar agreement, or at the very least to cooperate so as to coordinate things such as airline flights, rail schedules and hotel categorization. As well, they must exchange data and help push governments for infrastructure and policy changes.

But they are not naive to think there would be no problems, even with their new federation. First, they said, we know we need funds to hire a federation manager.

And then there’s a problem that some members are afraid Greece will take over everything now that the federation is set up here. We are not concerned about the latter. “We signed this agreement because of the utmost trust we have in president of the Hellenic Association of Travel & Tourism Agents, Yiannis Evangelou.”

Country travel agent associations belonging to the federation include: Tursab of Turkey, Yuta of Serbia and Montenegro, Atam of the Former Yugoslav Republic of Macedonia, Bata of Bulgaria, Utabih of Bosnia and Herzegovina, and Albtours of Albania. Anat of Romania, Uhpa of Croatia, Atas of Slovenia are expected to sign at a later date.