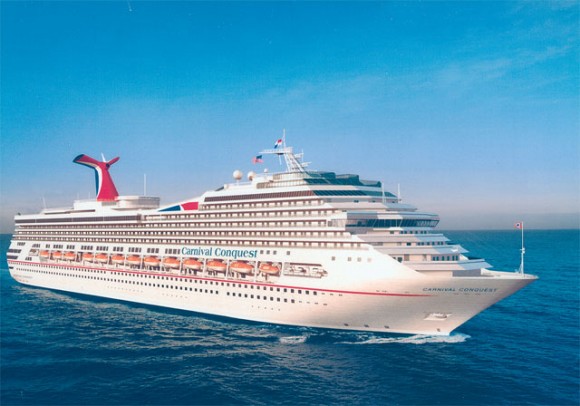 This is the new 2,974-passenger Carnival Conquest that sails the West Caribbean. Its sister ship, the Carnival Glory, will be launched this summer. Carnival Cruises is represented here by Amphitrion Holidays.

Greece’s passenger shipping association says its sector is in for a difficult time this year. It wants government to help soften the blow with a cut in port costs, and subsidies for new employees, for newbuildings, and for employee insurance. It also wants a 50% increase in advertising abroad funds. But although most cruise lines are concerned, they are also upbeat.

Royal Olympia Cruises, despite its heavy focus on the eastern Mediterranean and its 50-percent dependency on U.S. sales, is not overly concerned. According to its marketing vice president, Gabriel Diakakis, the outlook is not all gloomy, with bookings up 15 percent year on year. But he admitted: “Everyone is hedging their bets that many customers are choosing flexible packages so that they can switch destinations in the event of a crisis.”

Festival Cruises Chairman, George Poulides, meanwhile, maintains that southern European cruisers are used to war concerns and may not be so easily dissuaded from sailing, even if military action is taken against Iraq. Up until today this has absolutely not affected bookings, he says, and adds that Festival will have two ships that cruise the eastern Mediterranean this season.

And Genoa-based Costa Cruises has made some changes to confront a difficult situation. With a U.S. customer base of 15-20 percent last year, the cruise line now markets itself as a Europe-dependent operator and concentrates on areas less favored by North American travelers, such as the Canary Islands. Immediately following the September 11 attacks against the U.S., Costa switched one ship from the Caribbean to the Canaries.

However, Costa says 2003’s cruise season is off to a slower start than expected. Initial bookings are higher than last year, but they are slow given that the operator has a 20 percent increase in capacity this year.

Generally, however, cruise lines that rely heavily on North American customers and Mediterranean itineraries are very concerned about the possible impact on bookings of potential conflict in the Middle East.