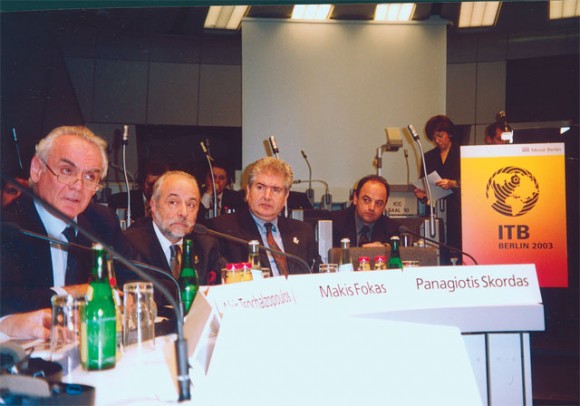 Development Minister Akis Tsohatzopoulos (left), during a press conference at ITB, said: “Uncertainties arising from the prospect of a war in Iraq are bound to affect Greek tourism, but only to a small extent. There are clear delays in bookings in all southern European countries…but the deficit in April and May arrivals will be made up by the end of the year.” He expects a 10-15% drop in arrivals from Germany to Greece.

Berlin’s international tourism exhibition last month was an eye opener for some but a chance to carry out substantial business for others. Stands at Greece’s pavilion were perhaps the least visited while stands at neighboring pavilions (France, Portugal, Spain) welcomed a steady stream of visitors.

Greek exhibitors said the huge ‘store front’ stands of the Hellenic Tourism Organization and Athens 2004, which covered the entrance to the pavilion, lured most visitors who then continued on to other pavilions instead of entering the Greek pavilion. Greek exhibitors with representation in Germany, however, such as Greek ferry lines, said they were pleased with the business accomplished.

On a general scale, the fair’s organizers said they found most exhibitors experienced positive commercial results during the fair, despite the difficult economic situation. They said that the international tourism industry seems to be facing up to the challenges and that interest in travel remains as keen as ever.

“Here at our ITB Berlin the industry’s message was clear: despite a weak bookings situation we will not bury our heads in the sand but intend to utilize this crisis as an opportunity for restructuring, ” said the fair’s chief operating operator, Dr. Christian Goke.

During the five-day event, he said, there were many positive indicators for the tour operators, airlines, hotels and 181 destination countries. Interest in travel remains as keen as ever and the international tourism industry at ITB was already preparing its strategies for the period following the current crisis. 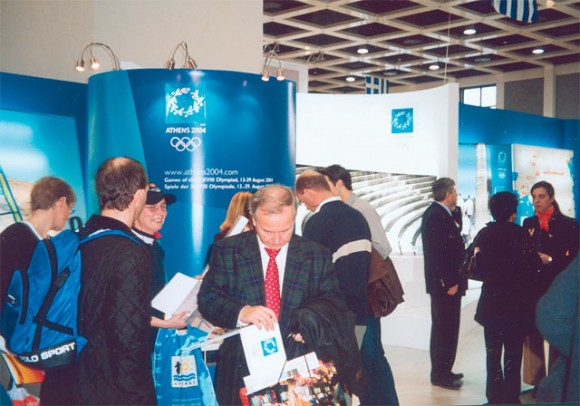 Athens 2004 stand, which fronted the Greek pavilion along with the Hellenic Tourism Organization’s information stand, lured in the majority of visitors.

As emphasized during the ITB 2003 by the World Tourism Organization, contrary to expectations, travel over the past year was successful in many respects. Forecasts for the coming years are also positive despite difficult economic conditions in several regions of the world and the generally tense geopolitical situation.

An example of how intense travel dreams remain, a visitor simply had to pass by the German pavilion, which was packed almost every hour of the fair. Perhaps this simply shows that Germans intend to concentrate on domestic destinations this year. Organizers said Germany was even more in demand in 2003 than in the previous year by all. Public and trade visitors also displayed a particularly keen interest in destinations in the Asia-Pacific region and in Southern Europe. Current trends, it was found, favor the market segments of cultural travel, wellness, river and ocean cruises, and tourism to experience nature.

ITB 2003 welcomed 9,971 exhibitors (2002: 9,678) from 181 countries and territories, which represented every sector of the international tourism industry. The fair attracted over 129,943 visitors (2002: 122,980). Trade visitor numbers remained steady at 67,000, and they came from 180 countries, while more members of the public were recorded. The fair’s organizers said that business deals were signed by almost half of all the exhibitors.

As revealed by a survey conducted by an independent market research organization, 48 percent of exhibitors reported signing numerous contracts. More than three-quarters of them said they were satisfied with the commercial results of their participation. Eighty percent expect follow-up business to be at least satisfactory, while 46 percent are anticipated good to very good business after the fair. 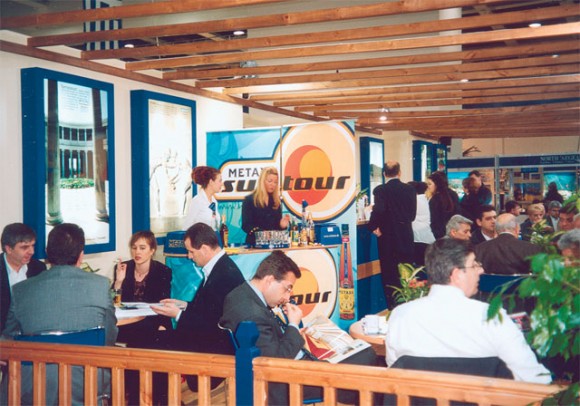 The busiest spot within the Greek pavilion, albeit with Greek exhibitors, was the Hellenic Tourism Organization’s “coffee shop.”

Exhibitors were more restrained in their expectations regarding the economic development of the tourism industry, with 47 per cent expecting the situation at the beginning of 2004 to be better than it is at present. Already 89 per cent of exhibitors have announced their provisional intention of attending the ITB 2004.

With 616 exhibitors the USA was once more the second largest foreign delegation and was again represented by its “SeeAmerica Pavilion”. One of the new features here was the display of photographs on the subject “SeeAmerica Byways”, featuring views of some of the most attractive destinations. The mood on the USA stand regarding the future development of tourism was confident and exhibitors expressed their satisfaction with the attendance levels.

The largest of all the foreign exhibitors was Spain, with 855 companies. Most of these exhibitors were more satisfied with the ITB 2003 than they had been at its predecessor last year.

The Chinese stand received a large number of visitors, members of the public and trade visitors alike, proving that China continues to be a popular destination for German and European travelers.

Questioned about the commercial results of their visit to the fair, over 90 percent of trade visitors gave a positive assessment. During the course of the ITB Berlin 18 percent of them were able to sign contracts and two thirds established new commercial contacts. Approximately half of all trade visitors expect to enter into further negotiations after the ITB Berlin.

Trade visitors were less upbeat about the current situation in the industry. Almost two thirds consider it to be negative. In the medium term, however, the majority of them believe that a more favorable economic situation will develop.

The section devoted to “Culture Tourism” continues to grow in strength and this year attracted over 200 exhibitors from 14 countries. Here, exhibitors said there was considerable demand for cultural attractions and that many people are searching for new cultural and artistic experiences, and this was very evident in the discussions between exhibitors and trade visitors. 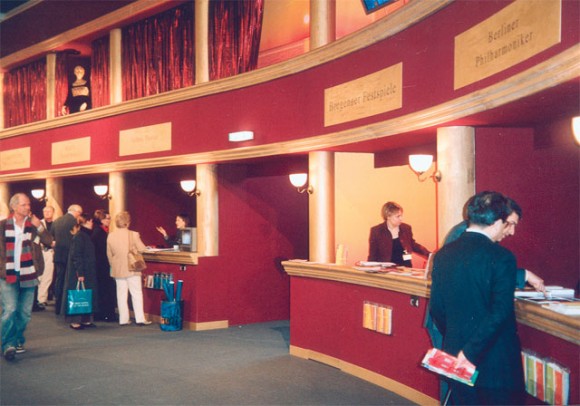 Greece’s Hellenic Festival Organization’s booth within ITB’s “Cultural Hall” proved to be very popular but the Greek participation here was minute compared with that of Spain.

The response by trade visitors and the public to the Nature Experience Hall was extremely positive. The 50 exhibitors from 10 countries presented their programs and concepts for experiencing nature and natural attractions in Germany, Europe and overseas, and members of the public used this opportunity to request environmental information and obtain suggestions for upcoming holidays.

The ITB Travel Technology section featured 86 companies from 9 countries with their reservation and information systems and a wide range of online programs.

There was a good response to the ITB Travel Technology Congress, now at a new location at the heart of the Travel Technology section of the fair. Forty speakers and presenters, the leading managers from major national and international companies, focused their attention on key topics such as online reservation systems, legal and security issues, the hotel industry, increased productivity through the application of technology, and multi-channel sales.

Jeff Katz, Chairman of the Board and President of Orbitz, outlined the future development of the online market in the USA and in Europe. Each month 40 million Americans visit tourism web sites and in 2002 online bookings in the USA rose to 34 per cent. The main reasons he gave for this rapid rate of growth are the lower rates, clearer price structures and 24-hour availability. Jeff Katz predicts that the online reservation wave will soon hit Western Europe, although in a less pronounced form. He expects a turnover of 15 billion Euros by 2006.

Visitors were primarily interested in vacation and recreational travel, and in tourism for cultural purposes. The most popular holiday regions were given as Germany (55 %) and Southern Europe (50 %), followed by Northern Europe (19 %) and Eastern Europe (17 %).

The International Tourism Exchange ITB Berlin 2004 will take place from 12 to 16 March on the Berlin Exhibition Grounds. 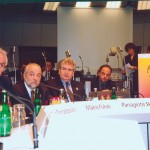 Development Minister Akis Tsohatzopoulos (left), during a press conference at ITB, said: "Uncertainties arising from the prospect of a war in Iraq are bound to affect Greek tourism, but only to a small extent. There are clear delays in bookings in all southern European countries...but the deficit in April and May arrivals will be made up by the end of the year." He expects a 10-15% drop in arrivals from Germany to Greece. 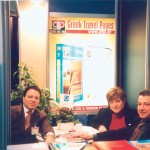 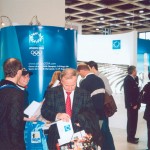 Athens 2004 stand, which fronted the Greek pavilion along with the Hellenic Tourism Organization’s information stand, lured in the majority of visitors. 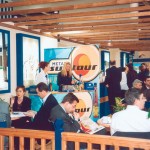 The busiest spot within the Greek pavilion, albeit with Greek exhibitors, was the Hellenic Tourism Organization’s “coffee shop.” 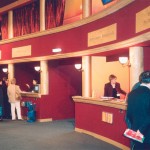 Greece’s Hellenic Festival Organization’s booth within ITB’s “Cultural Hall” proved to be very popular but the Greek participation here was minute compared with that of Spain. 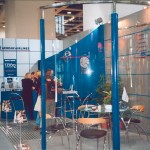 Aegean Airlines, because of its frequent flights between Athens and points within Germany, was kept fairly busy during the entire fair. 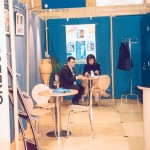 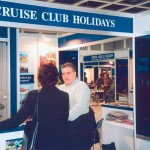 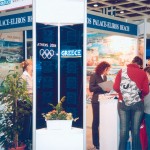 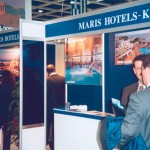 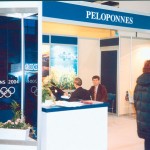 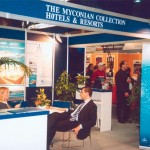 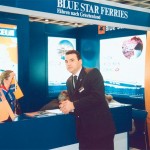 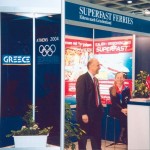 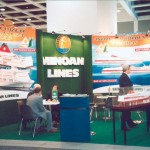 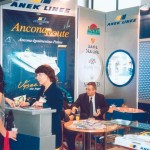