Tourism arrivals to Greece in 2002 remained at a satisfactory level, said the Word Tourism Organization‘s secretary general, Francisco Frangialli, during the recent Fitur travel fair held in Madrid. He added that prospects for Greece’s tourism sector remain positive in light of the Athens 2004 Games.

On a general scale, he said that tourism arrivals last year were up some 3% with some traditional destinations posting serious drops in arrivals while some newer destinations (the Balkans) posted impressive increases in arrival numbers.

In the meantime, Mr. Frangialli said the threat of war with Iraq places 2003 tourism possibilities within a precarious position. As a result, he said, most tour operators will pressure tourism enterprises, in particular hotel units, for low prices.

Already, Germany and Britain’s biggest tour operators, who send almost half of all visitors to Greece annually, are pressuring hotel units on Crete and Rodos. For the moment, room rate discounts are in the area of three percent, but hoteliers say continual discounts during the past several years put prices at 1995-96 levels.

Latest estimates from hoteliers show advanced bookings from Britain are down some 30% over the same period last year and from Germany they see a drop of some 18%. But things may not be as bad as forecast. Last year we had many in the industry forecasting doom for 2002, yet the preliminary tourism statistics for 2002 are surprising. For the first time in history, the number of international tourist arrivals has exceeded the 700 million mark, and despite all the grim expectations and debates about the crisis, the year ended with a 3.1 per cent increase. Tourism has once again proven its resilience. 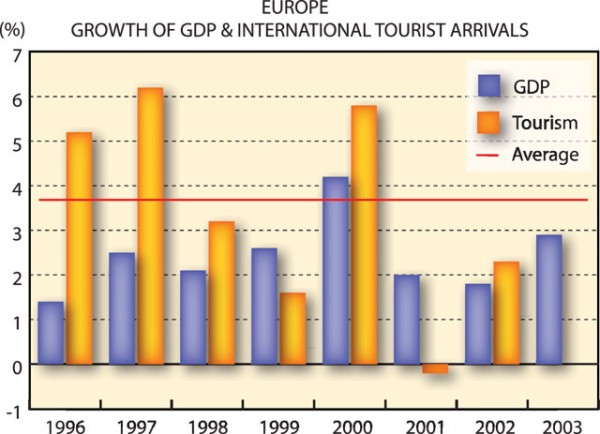 In total, according to the preliminary data sent to the World Tourism Organization from official sources throughout the world, almost 715 million international tourist arrivals were registered last year. That is 22 million more than in 2001 or, compared with the “millennium year” which many experts claim should be taken as the reference, almost 19 million more than in 2000. (International tourism arrivals count only part of world tourism, as domestic markets are not included.)

“We can be relatively satisfied with the year 2002 and cautiously optimistic about the development of 2003,” said Mr. Frangialli. “The statistics did meet our expectations, in some parts of the world they even exceeded them, however we should not forget that the threats are anything but over.

“We have a lot of work to do to reaffirm positive trends, but first of all, to regain consumer confidence where needed. World tourism has never before felt such a need for cooperation as now,” said the secretary general. The preliminary results for 2002 show a substantial change in the world tourism map: Europe remains firmly in first place, while Asia and the Pacific claimed the number two spot from the Americas.

All the European subregions ended 2002 with positive results. South Mediterranean Europe, with Spain, Italy and Greece, leads the way with its share of the world market exceeding 20 per cent, eclipsing Western Europe by barely half a percentage point.

The tourism industry rapidly reacted to the important structural changes in the sector and to the new challenges in the relationship between supply and demand, said Mr. Frangialli.