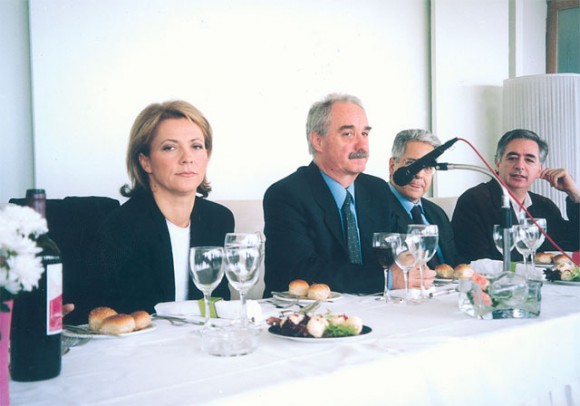 Hellenic Association of Travel and Tourism Agents’ vice president, Eleni Papadopoulou, and the association’s president, Yiannis Evangelou, during a working lunch to discuss tourism problems with the media.

Greece and its Mediterranean European Union neighbors must create new tourism products in order to survive and flourish as international tourism destinations, said Yiannis Evangelou, president of the Hellenic Association of Travel and Tourism Agents during a recent working lunch with media representatives. “We could soon see mass tourism arrivals to our area drop by thirty to forty percent,” he warned.

Mr. Evangelou outlined a long list of problems -visas, development incentives, ferry-line ticketing, entrance points to Greece, advertising and promotion campaigns- but the bottom line was prices. Greece, he said, can no longer be classed as a cheap mass-market destination, nor can it match package deals sold by competing destinations such as Turkey, Bulgaria and Croatia.

And although problems mentioned by Mr. Evangelou were related to government decisions, he agreed that his sector must do its part and create, promote and sell new forms of tourism products. Products, he said, that would entice up-market travelers to Greece.

In the meantime, he said, we have to confront the many effects connected with the possibility of a war in Iraq. At this point in time, bookings from Greece’s two main markets, Britain and Germany, are down by around 30% and 15% respectively, said the association’s president.

In order to confront this and the many problems facing the industry, Mr. Evangelou said a positive step would be the creation of a Greek Tourism Chamber as proposed by the government’s development ministry. But while such a chamber could play a vital role, said the president, problems will not go away unless government takes a more serious stance toward solving them.

As examples, he referred to the time-consuming problems caused by the need for visas due the Shengen agreement -not only for potential visitors to Greece but for the association that must spend much of its time attempting to solve these problems for members- and the lack of infrastructure at entrance points to Greece where visas and passports must be checked.

Mr. Evangelou also mentioned a dire need for increased advertising and promotion activities of Greece abroad. He said that the appropriate authorities (the Hellenic Tourism Organization) fail to carry out announced promotional programs and that nothing is being done in markets such as Latin America and the Visegard countries.

Announced sailing times and route networks are still unreliable as ferry companies appear to change them at will, he said. And we still lack an electronic booking system for all ferry lines, which results in overbooking problems caused by ferry lines and not travel agents.

Mr. Visvikis also mentioned the lack of infrastructure work at most Greek sea ports, which plays havoc with the nerves of most passengers as they try to find and board their ferry. He believes many problems could be solved with the adoption of a proposed code of ethics agreed upon by all in the ferry-related sector.