The Rise and Fall of Greece’s Top Name in Travel 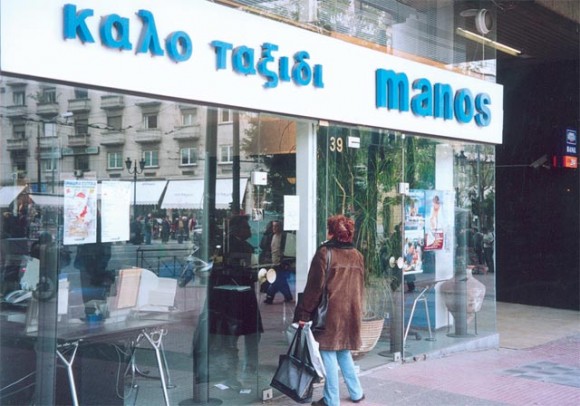 Onlooker checks out the storefront offices of Manos Travel System to try and figure out whether or not the company is still operating.

A few years back, many in the travel industry would point to Manos Travel as an example of how to succeed in the business. The company started from a small office and through pioneering ideas grew by leaps and bounds into the biggest and most successful in the country. But something went wrong in the late 1990s, which brought the company to its knees and then to its final demise this past December.

Many in the industry quickly cite reasons for the giant’s downfall. Some say the company attempted to grow too big too fast during the past several years when the industry was going through an upheaval. Others say outsiders tried to come in and wreck havoc on management.

Others, still, feel the company grew too big for a lone owner manager who took some fatal decisions that left the company with reported debts of more than 19 million euros.

The bottom line is that most likely each of the above, coupled with bad timing, are at least part of the reasons for the demise of Manos Travel, which rang up sales of 31.6 million euros at its peak in 1999.

Troubles for the 64-year-old Manos Tsatsakis began in late 1998 when he decided to found an airline with the financial assistance of Anek Lines. But when the Crete-based coastal ferry line had second thoughts and backed out of the deal, Mr. Tsatsakis went on his own to create the airline, instead of writing off initial costs.

The airline’s start-up drained precious cash flow from Manos Travel. Then, shortly after getting in the air, legal battles with other domestic air carriers cost Mr. Tsatsakis millions of euros, and his airline evaporated along with his cash flow.

Around the same time, Mr. Tsatsakis invested heavily in city properties and two hotels, and this was at around the same time of the Yugoslav crisis and when global tourism received a crippling blow from terrorists.

Apparently, bad timing and an error in judgement cost the pioneering entrepreneur the fruits of 30 years of labor.

Manos Tsatsakis arrived in Greece from Egypt in 1950, finished his schooling and went to work for an airline. In 1965, after realizing there were Greeks who wanted to vacation abroad but had little help from travel agents, he opened an agency that specialized in outgoing travel packages.

Through the years, he opened new markets abroad for domestic travelers and expanded his business with unique ideas for the time -organized travel, hotel management, an office abroad, a charter airline, a franchise network, and Internet sales- and allowed his company to mature slowly.

These were exciting and profitable years for the Greek travel industry.

It was a time when business smarts and tight one-man management could create small fortunes.

That’s not to say that managers employed by Manos were inept. On the contrary, many moved on with the experience gained from Manos Travel to create their own business and prosper, such as Spiros Ginis of Ginis Vacances.

Such a drain of competent executives, however, may be another reason why such a big Greek travel company, which depended on one man, was led into and was unable to confront an unfortunate series of problems. 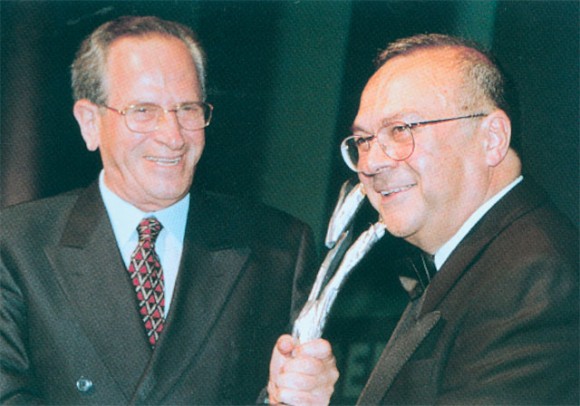 Makis Fokas of the Electra Hotel Group receives a tourism award from Manos Tsatsakis when the latter inaugurated the annual TTG Greece Tourism Awards, which were considered the highlight of the year for tourism professionals.

Furthermore, some professionals in the industry place part of the blame for the company’s demise on government. They say public tourism leaders painted an overly bright picture for the sector when they knew better. As well, they say government has safety nets in place that warn of danger for a travel business, such as funds owed to social insurance funds and travel agency operation permits, but these failed to work. The latter, they say, lost much of its value when responsibilities were passed on to prefectures from the Hellenic Tourism Organization (EOT).

One highly placed executive in the organization reminds that when permits were handled by EOT there were no major bankruptcies in the sector. But adds that the organization’s offices warned the Attica Prefecture long before December that there were rumors of financial problems for the Manos group. And although the prefecture took steps -it cancelled permits of three Manos companies- the steps were considered too few and too late. These steps, however, did help ensure that a minor number of Greek travelers were harmed by the company’s closure.

Yiannis Evangelou, president of the Hellenic Travel and Tourism Association, when asked why travelers weren’t warned in the period between December 18 and 23, said, “I suppose the new company owner (Rexco is said to have purchased 98% of shares) didn’t have time to learn all of the commitments. However, nobody was actually left stranded.” In most cases we were able to come to an agreement to satisfy the suppliers concerned, but some 80 people had to pay all or part of the cost themselves, he said. A number of those called our association to complain, but no official claims have been received yet, he added.

“According to Greek consumer law, all tour operators have to take out insurance to cover themselves for such eventualities and thus the new company or the insurer will pay compensation claims,” said Mr. Evangelou.

Meanwhile, the Hellenic Association of Travel and Tourism Agents has called for a reform of the industry’s legal framework (insurance coverage and licensed operators be permitted only to arrange tours) to protect both operators and travelers.

Mr. Evangelou said that inadequate government supervision gave rise to the chronic problem of thousands of illegal tour operators, which he considers the main cause of the industry’s difficulties, including the recent collapse of the country’s major bureaus, Manos.

He said such illegal operators, include municipalities and churches that organize holidays for pilgrims, students and clubs.

The travel association called for the state to relinquish a number of responsibilities to legal operators (particularly insurance coverage) who, in collaboration with consumers’ associations, could forge control mechanisms to protect both sides, as in Britain and the Netherlands through their own insurance fund.

The Hellenic Tourism Organization’s executive said that there is ample legislation in place for Greek tour operators and travel agents to create their own insurance coverage. “All they have to do is create a fund through a small additional charge on all packages sold, but they expect the government to supply funds, which just will not happen.”

The association said travelers hit by the collapse of Manos were entitled to seek full compensation from the state, as it had failed to implement EU directives insuring travelers against such eventualities.