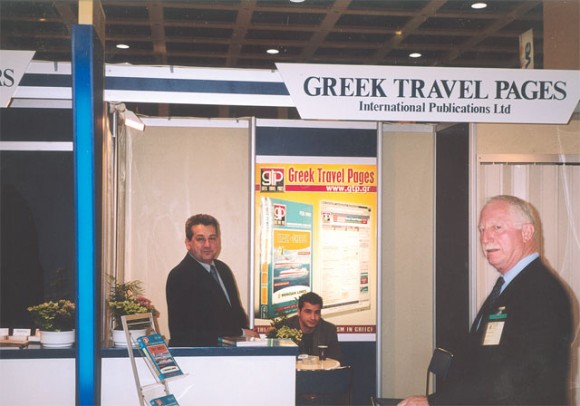 Greek Travel Pages will once again attend and exhibit at International Tourism Exchange ITB Berlin. GTP staff will concentrate on promoting not only the company’s publications but also the radical development of www.gtp.gr.

The world’s leading tourism exchange, International Tourism Exchange ITB Berlin, remains the industry’s number one fair and Greek participation this year again will be substantial. Susanne Rousselot, ITB Berlin’s manager, says that despite current difficulties being experienced by the international tourism industry the number of exhibitors and the size of the display area at the ITB 2003 will remain the same as in ITB 2002.

She says that many companies are bucking the current trend and are making trade fairs a part of their calendar again. “No countries and territories have withdrawn from the fair but leading tour operators who were absent from the ITB 2002 have announced their intention to return at the ITB 2003,” she says. These include Thomas Cook, Lufthansa, START, SABRE, and Club Med.

As far as travel this year is concerned, Ms Rousselot says she cannot imagine that the German public will significantly alter its plans for traveling abroad, notwithstanding possible future events. These may subsequently have an influence on decisions as far as travel destinations are concerned, she says, and ITB seminars and lectures will explain possible future changes in travel.

ITB Berlin has always been in tune with the market’s demands, has reacted to current trends and industry needs, and has provided them with a forum, according to Ms Rousselot. “This is the great advantage of the ITB and one of the reasons why it continues to be the world’s leading tourism exchange.”

The 300 congress events are an excellent forum for all exhibitors taking part at ITB, she says. Any crises are of secondary importance here, so that the seminars, workshops and conferences focus on furthering developments in the tourism industry.

To remain on top, ITB intends to expand into other segments of the international tourism industry. Its organizer, Messe Berlin is indeed conducting talks on the subject of collaborating with other organizers in order to establish ITB Berlin as a brand name in a number of countries.

Meanwhile, Ms Rousselot believes the trend towards using the Internet is indicative of future developments in the tourism industry. The effects this will have are difficult to single out at the present time, she says, but whatever the nature of things to come, trade fairs and tourism exchanges will increasingly have to take this trend into account.

As well, she says, new technologies are making exhibitor participation at trade fairs more effective. “A virtual trade fair offers additional advantages and benefits,” she says, “but it will never be able to replace a real trade fair, whose lifeblood is communicating, one-to-one discussions, and being able to make face-to-face contact, but instead will act as an additional means of exchanging information.”

This year’s fair opens exclusively to exhibitors and trade visitors, on Friday and Tuesday and the general public makes use of the weekend days in order to obtain information about travel destinations and tour operators.