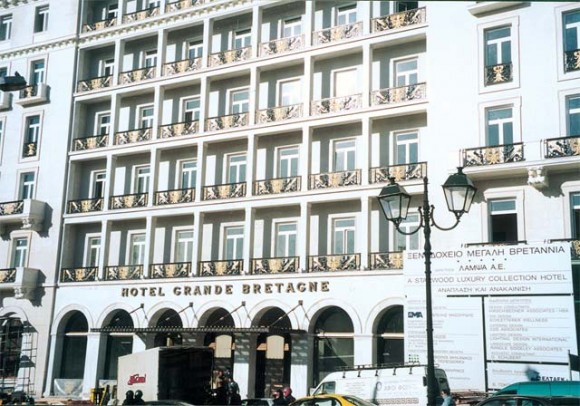 On the first of next month, Athenians celebrate the rebirth of the capital’s most magnificent lodging unit: The Hotel Grande Bretagne. After spending some 70 million euros during the past year and one-half and literally gutting the old “palace,” owners rebuilt the GB, as it is affectionately known by Athenians, into a wonder that compares with its glorious past.

Its history goes back to 1842, just 12 years after Greece freed itself from the Ottoman Empire and just seven years after the country’s capital moved from Nafplion to Athens. It was built as a superb 80-room mansion across from the King’s palace and hosted visiting heads of state and dignitaries of that era. In 1865 it welcomed its first paying lodgers and in 1874, the mansion was officially turned into a hotel by its new owner, a renowned Greek chef.

Throughout the decades that followed, it continued to host world personalities, including the foreign athletes to the first modern Olympics in 1896. It received its first expansion works in 1924 and another new wing in 1930. The next new wing, in 1939, included air-conditioning, a rarity at the time. After the rages of both a world and civil war, two stories were added in 1953, and in 1956 the original mansion was replaced with a seven-storey building.

By the early 1960s, the Hotel de la Grande Bretagne covered 1.5 acres of prime downtown property and became the second most well known landmark in Greece, next to the Parthenon. This is not surprising as from its first days up until the late 1970s numerous political plots and maneuvers were conceived within the walls of the Grande Bretagne by the famous, such as England’s Harold Macmillan, and infamous, such as Adolph Hitler. And, of course, a barrage of Greek politicians and would-be politicians. For some 120 years this historic city landmark remained in the hands of the original owner’s family members. But in 1992 the Ciga hotel group purchased the majority shares. Now part of the Starwood Luxury Hotel Collection — in the late 90s the Hyatt Regency picked up the majority shares of the GB (Lampsa) — the ‘new’ GB boasts 290 luxury rooms and 37 suites, two of which are presidential suites. New amenities include a health spa and an indoor heated swimming pool.

On the top floor there is an open pool, complete with pool bar, and the new Athens Panorama restaurant. Three other “meeting places” include the famous GB Corner restaurant, Alexander’s Bar and the Winter Garden.

GB’s new general manager, John Lagos, says he heads a team of professionals who will attempt to “marry” the hotel’s distinctive past with the demands of the future. “Our main aim is for the GB to pick up its history as being ‘The’ meeting place for Athenians.

“Except for high quality services, we’ll offer prices that are more than acceptable, for example, a coffee will be less than four euros,” says Mr. Lagos.

He says that similarly low prices, considering the service and environment, will be created for the hotel’s restaurants. Mr. Lagos, of Greek descent (Lagoudakis), has 34 years experience in the hotel industry. He has managed up-market units on almost every continent.