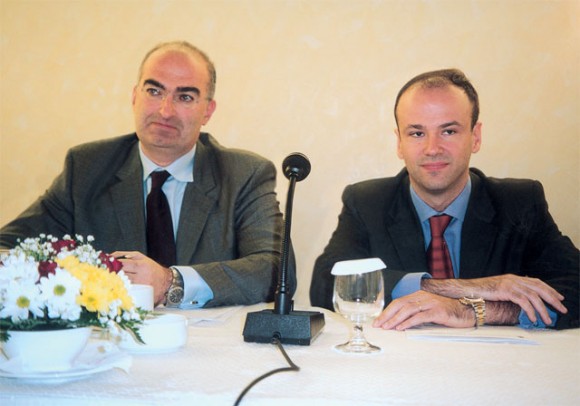 Georgos Tsakiris, the newly-elected president of the Attica Hoteliers’ Association, with his new secretary general, Yiannis Retsos, during their first press call.

A convention and visitors bureau for Athens, that’s the top priority for the new board of directors of the Attica Hoteliers’ Association. Already, the board has the support of the Attica Regional Authority. The next step is to convince travel-related associations in the region to cooperate.

“Our first basic step is to scrap up the funds required to create and run a bureau,” said Yiannis Retsos, the association’s new secretary general. “But we all know that associations have very limited budgets.” He believes, however, that his board can get cooperation and funds provided there is a stipulation that funds are invested for a maximum two-year period. “If after that, we don’t see positive results, we’ll drop it.”

Another priority of the association, according to its newly-elected president, Georgos Tsakiris, is to make a valiant attempt to solve the plethora of problems facing Attica hoteliers. He said these include what should be simple things like parking areas in front of hotels for taxis and tour buses, and securing funds for the promotion abroad of the Athens/Attica region.

Mr. Tsakiris said promotion is vital as hotels in the region are losing guests and revenue. In 2002, with luxury hotel units closed down for renovations, overnight stays are still down by 3 to 4%. There’s also the problem or reduced room rates given in an effort to fill rooms, which drags down revenue even more.

The association says the Attica region has seen no promotion over the past 15 years. “The present efforts to call for a bid to create a marketing plan and ad campaign is so far behind, we doubt if it will get past the present point,” said Mr. Tsakiris.

He said the Hellenic Tourism Organization has called for a bid on a promotion plan for the area but then it discovered it had no funds available to implement such a promotion. His only hope now is the Attica Regional Authority, which has 1.5 million euros for promotion activities.

The problem here, however, he said, is that the money must be spent in cooperation with the Hellenic Tourism Organization, but the organization says it is unable to do so.

Separately, for a better idea of Greece’s hotel situation readers may want to take a look at the recent hotel study completed by JBR Hellas, a member of the Horwath consulting services group, which is considered the benchmark for the Greek industry. The study compares the Greek market with that of the European Union and remarks that Greek hoteliers are heavily dependent on tour operators that work on a very low profit margin basis. The study says 75% of all hotel categories except deluxe depend almost wholly on tour operators at a time when their European counterparts have a 31% dependency. Average room rates here are one-half that of the rest of Europe.

Bids Called For The Sale Of Galileo Hellas