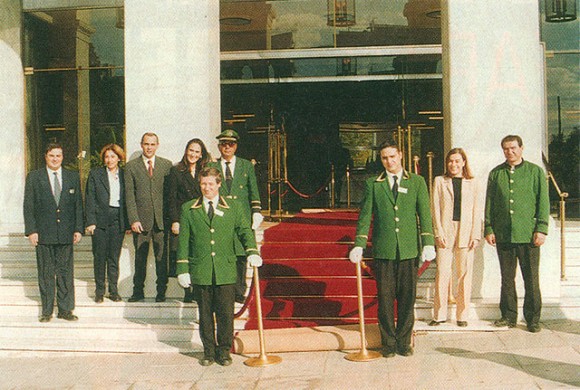 Grande Bretagne’s staff in late November rolled out the red carpet for the last time. The traditional Athenian hotel closed for renovations until early in 2003.

Although most of the major Athenian hotels that have closed for radical renovations had planned to do so long before the September 11 attack, the timing has turned into a godsend for the rest of the sector. And with bookings down to cover only about 35% available beds, hoteliers should be very pleased with the turn of events.

For the broader hotel map of Athens, the direct repercussions include the channeling of clientele and professional events to other hotels within the capital during the entire renovation period. Central city hotels that have closed for renovations, which will last from six months to 18 months, include the Athens Hilton, the Grand Bretagne, the Electra Palace, the Christina and the Stadion – the President is undergoing a continual renovation program but closes only parts of the hotel periodically.

At present, more than 1,300 first class rooms in Athens are unavailable, which means the rest of the deluxe and first class hotels could easily benefit by some 20 billion drachmas as they absorb the up to 300,000 reservations usually handled by the Hilton and the Grand Bretagne alone.

Radical renovation and expansion of the Athens Hilton and the Grand Bretagne is expected to cost more than 117.4 million euros (40 billion drachmas). Both units say that in view of the 2004 Olympic Games it is not only a challenge but also a necessity for deluxe hotels to increase the standard of equipment and services provided.

Renovation of the Athens Hilton is expected to be completed on December of next year, according to the company executives. The Hilton’s expansion includes 15 new rooms and renovations alone will cost its owners some 44 million euros (15 billion drachmas.) On re-opening, the management status of the Athens Hilton will remain the same as an expansion agreement has already been signed with owner Ioniki Xenodohiaki.

The Grand Bretagne’s radical renovation, budgeted at some 76.1 millon euros (23 billion drachmas), is expected to last for a year and half from the beginning of December. The investment funding will be largely based on long-term bank loans of 54.3 million euros (18.5 billion drachmas), according to the Greek Hotels’ Company Lampsa, the Grand Bretagne’s major shareholder.

Upon completion of its modernization program, the Grand Bretagne will change its management status. The deluxe unit, which is currently managed by the Lampsa-Starwood (Sheraton), will be part of the Luxury Collection chain of the Starwood group of companies.

Meanwhile, planned new hotels for the capital still await final approval from government authorities. Thus far, the development ministry has approved less than half of the applications. Architectural permission and city planning permission have been granted correspondingly to 50% and 25% of approved ministry cases.

(Architectural plans for the King George are yet to be examined, the Orthodox Church’s applications have been approved but not as yet initiated, while the two applications by the Piraeus Harbor Authority are on their way for approval.)

In the meantime, the ministry of development has promised to implement a number of measures incorporated into the “Olympic Tourism Package” for the utilization of the Olympiad in order to promote tourism in Athens and the entire country, which envisages, among others, the expansion of hotel infrastructure and the modernization of existing hotels, through the funding of the third Community Support Framework package.