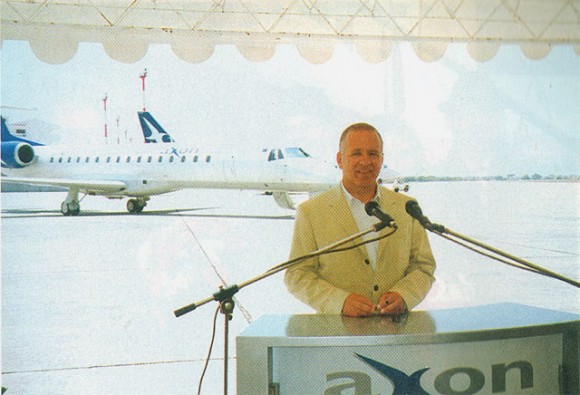 Thomas Liakounakos, chairman of Axon Airlines and Axon Holdings, presented airline’s five new jets this past summer just prior to the terrorism attack in the U.S. that overturned so many optimistic investment plans.

Axon Airlines, which was bidding to buy national carrier Olympic Airways, announced the suspension of operations on November 30, citing an industry downturn and rising losses in the wake of the September 11 attacks on the United States.

The now-defunct airline said in a press release that the international crisis in the air transport industry is rapidly worsening, losses are growing rapidly and the outlook for a recovery is a long way off.

In 1999, Axon, owned by Thomas Liakounakos, a prominent supplier of arms to the Greek military, invested in two modern planes to begin operations to Paris, Milan and Brussels. Last summer, it picked up another five jets to expand in Europe and open domestic routes.

However, if international and national conditions in the air transportation sector improve, “Axon Airlines will reconsider both the possibility of resuming operations and of carrying out our investment programs,” said the announcement from the company’s board of directors.

Axon had been the preferred bidder for Olympic Airways until early in November when talks appeared deadlocked over the company’s inability to ensure that it could come up with the necessary funds for the purchase.

Australian venture capital firm Integrated Airline Solutions was given the opportunity on November 19 to put its case for the purchase of Olympic Airways and it began talks with Credit Suisse First Boston, which is advising the sale. This came after four months of inconclusive talks with Axon despite the airline’s being named first bidder by CSFB.

IAS has the backing of Olympic pilots and magnates such as Constantinos Angelopoulos and Pavlos Vardinoyiannis.

In the meantime, despite the European Union’s refusal to allow the governmental financial support for airlines, some member-country governments intend to do so as the airline sector’s lack of liquidity has placed it on the verge of collapsing.

Some European travel experts have said that even the giant Lufthansa will have run out of cash before the end of the year. So far, it has laid off employees and cut salaries. On the other hand, it has ordered new planes.

British Airways, which announced a drop of 98% in its profits for the second quarter, is expected to survive the crisis due to its ensured liquidity. Air France announced a drop of 69% in profits and KLM estimates losses of 52 million euros (17.7 billion drachmas) after the terrorist attack.