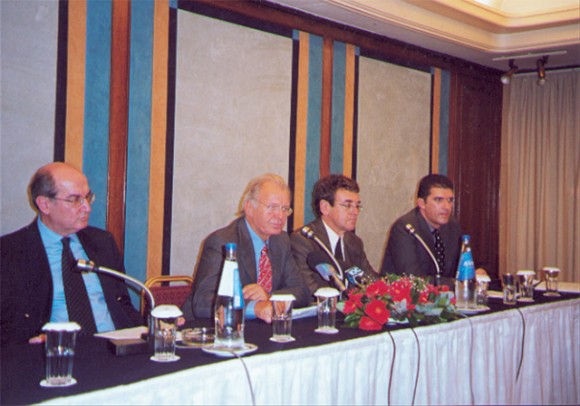 SETE’s president, Spyros Kokotos (second from left), lashed out at government for failing to create a long term tourism strategy.

The biggest problem facing Greek tourism is the lack of a long-term strategy and policy, said Spyros Kokotos, president of the Association of Greek Tourist Enterprises, during the 16th Philoxenia tourism fair. Mr. Kokotos added that the present government has failed to effectively incorporate tourism in its development policies.

“No development program has viewed tourism in terms of quantity and quality, specific aims, its contribution to gross domestic product, the balance of exports and imports, or its role in employment and the upgrading of quality,” he said, and thus the allocated funds for tourism achieve only minimal results.

Mr. Kokotos, however, called the intense planning undertaken by the development ministry and the Hellenic Tourism Organization in order to secure the EU monies as positive.

Of the of 596.2 billion drachmas in financing from the EU’s Third Structural Fund that is directed towards tourism, 208.2 billion drachmas will be spent on increasing the industry’s competitiveness. The plan involves setting up a marketing support network, upgrading accommodation and promotions, support of specialized tourist facilities, development of alternative forms of tourism and marinas, promotion of winter tourism, restructuring of tourism training program and business excellence initiatives.

“For the first time, we are seeing detailed proposals… Industry representatives were invited to comment on these and suggest improvements. These could have been ameliorated further if they had been presented for discussion before being finalized and forwarded to the relevant EU committee,” Mr. Kokotos said.

“The national tourism advisory council was totally ignored in this process, and its role – rather than advisory – has been limited to that of an audience member.”

Pointing to the state’s decision to focus on quality in tourism, Mr. Kokotos said it was impossible to substantially increase the number of golf courses in this country, for instance, or improve hotel standards when there was no relevant legislative framework allowing for land to be rezoned. As subsidies for such investments are low and limitations have been placed on property development, not one new golf course has been built, he added.

An example of the government’s disinterest in the sector is the fact that the Greek capital has no exhibition and convention center, Mr. Kokotos noted, despite repeated calls for the development of specialized forms of tourism such as congress organization.