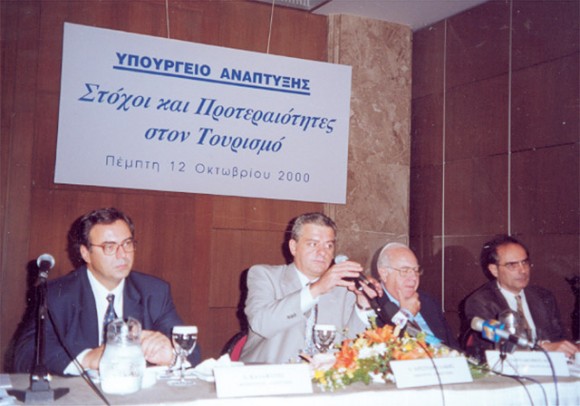 A total of 596.5 billion drachmas will be absorbed by the Greek tourism sector over the next five years with help from the Third EU Structural Fund and corresponding private investment, says Development Minister Nikos Christodoulakis. Much of the funds will aim at bringing these businesses into the digital age, he says.

Just as important, the minister promises minimal red tape for companies that apply for the subsidies. “To quote the Olympic games motto, we want Greek tourism enterprises to move ‘higher’ stronger and faster,’ says the minister.

Hellenic Tourism Organization‘s general secretary, Evgenios Yiannakopoulos, explains that a network of 13 support centers will be created so as to enable tourism businesses to gain access to technical know-how that ranges from basic information to research studies. This 7.3-billion-drachma initiative is set to begin in April of next year, he says.

The main focus is on the overall modernization of the sector’s hotels, campsites, and rented rooms and apartments. A total of 165.000 beds around the country are expected to be upgraded and 12.500 businesses provided with support – all at a cost of 126.7 billion drachmas. Every tourism sector, however, is open to subsidies.

Minister Christodoulakis says the funds available should help all tourism entrepreneurs to move away from the single-dimensional attitudes of the past -basically that Greece is a “sun and sea” destinations- and work to lengthen the tourist season beyond the months of May to October. “We need to decentralize the market and to work within a vast range of tourist activity,” he says.

With this in mind, a significant portion of funding – 36.1 billion drachmas – goes into alternative forms of tourism such us spa resorts, golf courses, marine tourism, convention organization, sports trips and gastronomy-based travel.

Furthermore, he says tourism studies in Greece would be improved. He stressed that since the tourism services field is people-oriented it is of the utmost necessity that everyone in the industry, from the bottom rung to the top, upgrade skills. A total of 15.4 billion drachmas has been allocated toward ongoing education. The scheme goes into effect next month. Mr. Christodoulakis also says that funds are available from the package for coop advertising with the private sector. “That’s on top of the 10 billion or more drachmas the state, through the Hellenic Tourism Organization, will spend on promotion next year”.

Separately, but in the same vein, the development minister says he has given express instructions to speed up procedures to formulate the Greek tourism advertising campaign abroad. The statement came as tourism entrepreneurs are expressing concern over the repercussions of the extensive publicity given in the foreign press to the sinking of Express Samina off the Aegean island of Paros.

Operators argue that the accident paints a negative picture for Greek tourism and it’s an utmost priority for the development ministry and the Hellenic Tourism Organization to spruce up its communication policy and promotion campaigns abroad.