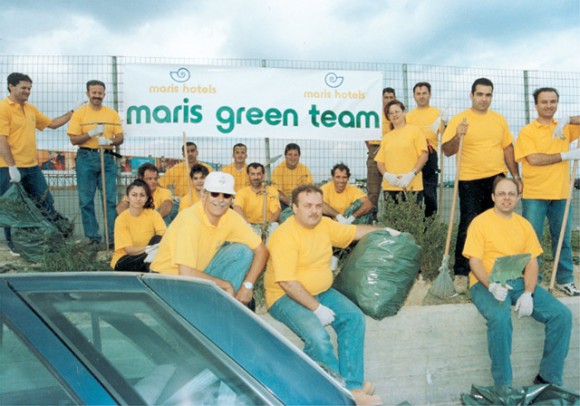 The Candia Maris on Crete, the first hotel in Greece and the third in the Mediterranean (and among only 100 units internationally) to possess the coveted ISO 14001 environmental management certification, has created a “Green Team” to help clean up Greece. All members of the team are hotel employees who volunteered for the task.

Green team members say they will focus exclusively on environmental protection projects, and that their efforts reflect the hotel group’s policy of active involvement in ecological conservation. The team’s basic aim is to take part in all types of environmental initiatives, such as beach cleanup programs and tree-plantings.

Candia’s Green Team made its first official appearance on September 27, World Tourism Day, when it highlighted the close relationship between tourism and the environment. Some 22 uniformed team members joined in a cleanup effort on Crete.

Both the Maris group and the Maris Green Team are members of the “Clean Up Greece” environmental organization.