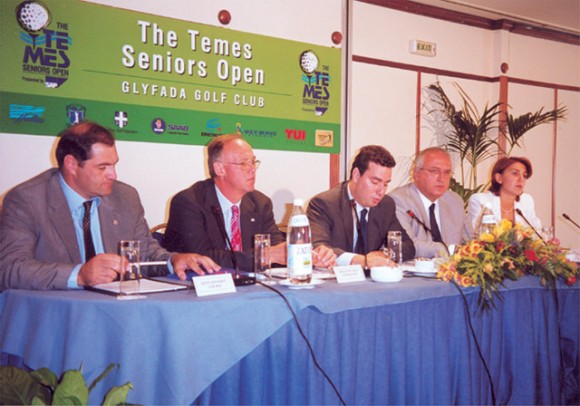 Ninety of the best senior golf professionals in the world (three are Greek) arrived in Athens last month to play a tournament that hands out some 70 million drachmas to winners. The tournament will be televised over 20 television stations around the world and be seen by some 140 million households.

Sponsors and organizers of the event said the aim of the tournament is to put Greece on the map as a up-market golfing destination and to attract international golf course builders.

Achilleas Konstantokopoulos, managing director of TEMES (Messinias Tourism Enterprises), said during a press conference that this is the second year in a row his company sponsored the event, which is now an annual one. He also related some statistics on golfing in Greece.

In the past decade, golfing as a sport has gown by leaps and bounds. The UK has almost four million golfers, while Germany and France have about 800,000 each. Italy saw the interest in playing the sport jump by some 80%. It now has 103,000 golfers. Countries like Norway and Austria posted increases of over 320% during the past decade.

In an attempt to develop golf in Greece, the Hellenic Tourism Organization has identified and approved locations for golf course development in the Aegean Islands, Attica, Central Greece, Chalkidiki, the Ionian Islands and the Peloponnese.

All existing courses in Greece were built in the 1960s and 1970s. Many golfers feel local facilities do not match Greece’s near-ideal conditions: year-round sunshine, a highly developed tourism infrastructure, beautiful scenery, and a booming economy.

This picture may soon change with the assistance of promotions like the Temes Seniors Open. Sponsors hope that the tournament will help Greece embark on a major expansion of its golfing facilities.

Presently, there are four 18-hole courses in the country, all in prime locations. The tree-lined layout at Glyfada is the oldest, built in 1962 and remodelled in 1979 by world-famous golf architect Robert Trent Jones. A second, at Afandou in Rodos, was built in 1974. A year later, two new courses opened, one at the Porto Carras tourism complex on the northern Halkidiki peninsula, and the other on the island of Corfu. The Corfu course is widely regarded as one of Europe’s most beautiful.

In 1997, a 9-hole course opened at Porto Elounda on the island of Crete and is a prelude to a new 18-hole complex now underway, managed by PGA GM of Bristol, UK.

Hoteliers Agree To Bookings For 2004 Games