The Association of British Travel Agencies (ABTA) holds its annual convention this month on the island of Kos. This is the second time the association selected Greece to host the event. In 1976, Athens hosted the event.

The island of Kos had been hotly tipped to be the host of the conference last year but problems with Olympic Airways had thrown doubt on the call.Even senior officials at ABTA had cited the union problems with Olympic Airways as the main stumbling block to selecting Kos. “We can choose from anywhere in the world, so we are bound to be careful. We are not yet quite reassured about the flight connections to the island” said one official.

The other strong contender, Lisbon in Portugal, anxiously awaited the official decision on July 28th. In the end the problems with Olympic were solved and the conference will bring over 2,000 of the UK’s travel trade executives to Greek shores. 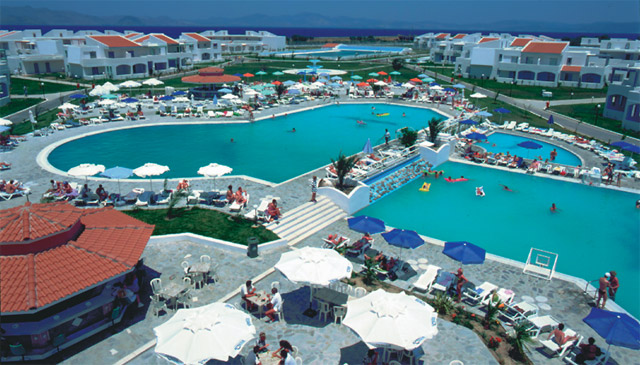 Kipriotis Village and its KICC center.

The Hellenic Tourist Organization in London under the directorship of Panos Argyros had lobbyed hard to lure the second largest travel conference (behind ASTA) in the world to the Kipriotis Village’s KICC centre.

The year before, ABTA held the conference in Marbella, a popular tourist destination for British tourists. Nevertheless, the region noticed a boost to tourism as a result of the event.

Would November offer a rather lacklustre image of the summer resort of Kos? Not so, it seems.  “We in the trade are used to seeing resorts out of season,” said ABTA.  “We are primarily interested in the main facilities”.

This year’s conference will concentrate on the Internet. Few industries are changing as quickly or as dramatically as the travel industry, says ABTA. Hardly a week goes by without the announcement of an acquisition or merger or the launch of a new online travel site.

To reflect these changes and to mark the beginning of a new era, the ABTA convention is changing too. Coming online this year will be a bold new look to ABTA’s convention, which will reflect the changing way in which we do business in the 21st century. This year will also see the introduction of an exciting new structure that will offer delegates a more flexible format, with more choice and even more networking opportunities.

The first ABTA convention of the 21st century will be on.lineon.kos.

Some 2,500 professionals from the travel industry will likely attend the ABTA convention on Kos. The changing competitive landscape means they will be keener than ever to learn what the future holds and what they need to be doing to survive and prosper. The Association of British Travel Agents is the UK’s Premier Trade Association for Tour Operators and Travel Agents. ABTA’s 600 plus tour operators and 2300 travel agency companies have over 7000 offices and are responsible for the sale of more than 90% of UK-sold package holidays.

At the conference, ABTA networks offer delegates more choice about how to use their time at the Convention Centre, often with several sessions and activities happening simultaneously. In recognition of the growing importance of networking and to more clearly differentiate the business and social aspects of the ABTA Convention, everything that takes place within the Convention Centre will now be known as abtanetworks.

The aim of abtanetworks is to provide delegates with everything they need…from outstanding business sessions and the opportunity to meeting up with industry suppliers, to a variety of meeting spaces where you can get together with fellow professionals for both business discussion and informal networking.