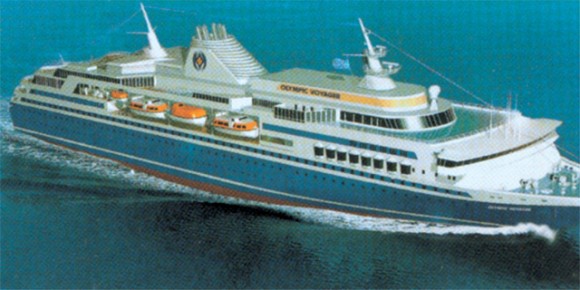 The new Olympic Voyager cruises at a speed of 27 knots and its six passenger decks can accommodate 840 passengers.

The Mediterranean now attracts some 15 percent of world cruise passengers, according to recent data from the Cruise Lines International Association. The prime source for cruise passengers continues to be North Americans, with some six million estimated for this year, or about 80% of the world’s cruising clients. For the next several years, the association predicts an approximate increase of nine percent annually.

According to research by the cruise lines association, some 75 million people in the USA consider taking a cruise vacation. The Caribbean attracts more people than other area of the world, with some 51 percent of the total.

Closer to home, Royal Olympic Cruises says some the USA supplies up to 60% of its passengers in summer for its cruising season in the Aegean and eastern Mediterranean seas, and more than 80% in the winter, when it cruises in the Caribbean and South America. Royal recently took delivery of the first new Greek-flag cruise ship in over a decade.

The strongest European country source is France, following by the United Kingdom.

Within the North American market, there are at present 158 ships, with 148,237 berths that serve cruise passengers. Thirteen new vessels are being introduced this year, with 17,633 berths. By the year 2004 there should be 206 ships, with 226,000 capacity operating in the area.

Separately, the new 3,500-passenger cruise ship Millennium, constructed by Chantilers de l’ Atlanticque shipyards in France, is the world’s first ‘green’ or ‘clean design’ ship. In an effort to pollution problems, it uses gas turbines that emit a fraction of pollutants when compared with diesel-powered ships. The ship also features a ‘dry cleaning’ system for flue gases, whereby there is injection of active carbon into the flue that isolates and removes poisonous dioxins, which are sorted and removed on shore rather than into the sea.

The waste generated by the ship’s 3,500 passengers and crew is treated aboard, shredded, compacted and pulped, and later disposed of onshore.

Even the undersea noise and vibrations have been minimized. Says one engineer: “It is not good to frighten whales.”