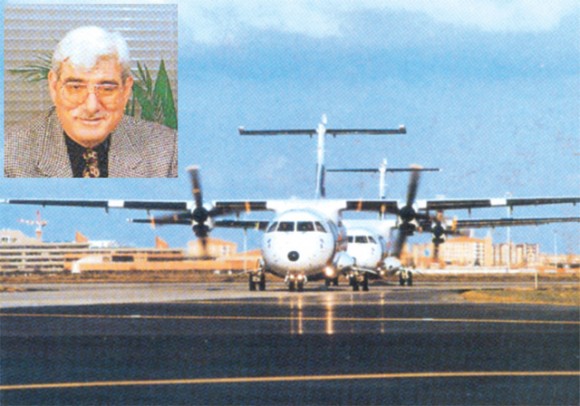 Another new domestic Greek airline takes to the skies. As of next month, newly formed Cretan Airways begins flights from Crete to Athens and Thessaloniki with ATR 72 passenger planes, according to the airline’s founder, Kostas Badouvas.

Mr. Badouvas, the former chairman of Air Greece, which has since merged with Aegean Airlines, created the airline with businessmen from Crete, Athens and Cyprus. He holds the post of chairman of the board. Petros Kalogerakis runs the operation as managing director, and George Alexakis assumes the position of deputy chairman.

At an official presentation of the Crete-based airline last month at Heraklio, Mr. Badouvas said the company had leased two 70-seat double-prop passenger planes, both of which are considered very economical to operate without sacrificing comfort and safety, and that they will arrive before the end of August.

“We have chosen aircraft which are all-weather, reliable, of international standards and suited to local conditions,” said Mr. Badouvas. “Admittedly, we have entered the air transport race at a difficult time,” he continued, “however, we at Cretan Airways hope and believe that the concept of a regional airline, which we represent, is absolutely viable.

“Our aim is to offer top-quality service on all levels. We have no intentions of presenting unfair competition but rather believe in cooperation between members of the industry, particularly with the national carrier.”

Mr. Badouvas said the healthy tourism base on the island supports the company, which will not hesitate to use the advantages of Crete.

He added that the airline is supported by shareholder base, “that will soon be expanded in order for all Cretans to have the opportunity to participate in this great effort.”

The company’s share capital stands at 800 million drachmas and is expected rise to 1.5 billion drachmas in the near future. Once the airline establishes a base with flights to Athens and Thessaloniki it will open other destinations within Greece and, later still destinations abroad.