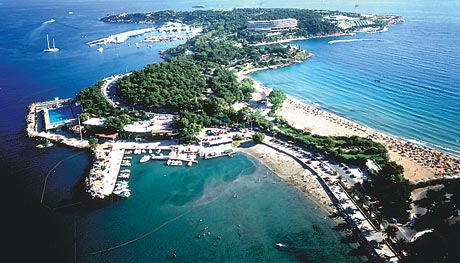 Greece’s National Bank, owner of the Astir Hotel Company, has placed the three-hotel group on the Athens Stock Exchange. The initial public offering last month places 14.7 billion drachmas within the group’s coffers. This cash will be used mostly to initiate a five-year 14-billion-drachma investment program.

Astir’s managing director and general manager, Alexios Kimisis, says the investment project includes the utilization of some 100,000 square meters of forest property that adjoins the group’s hotel units. All told, the units sit on 350,000 square meters of prime property. The forest area will be enhanced with a man-made lake and forest footpaths, and become one of the largest ecological-botanical parks in Europe.

The first phase of the modernization project begins this year with an investment of two billion drachmas. This phase will include the renovation of the last 14 of the 74 bungalows on the property.
Future plans include the construction of another 120 to 200 new bungalows, an independent conference center, a private train network to link all units and the creation of a health and beauty center.

Concerning expansion plans, Mr. Kimisis says he will create a high-quality fast-food chain. Besides the food units that will be set up on and within the property, and once established, units will be set up within major areas of Athens.

As well, the group plans to extend its activities in other tourism-related areas, such as air travel, marinas and properties – of particular interest are the properties to be auctioned of by the Hellenic Tourism Organization.

The Astir Palace resort at the Athens suburb of Vouliagmenis, which is made of three hotel units on a single property, claims that 45% of all revenue comes from conference and reception activities. This base revenue is strongest during the off and shoulder periods with the peak July-August period welcoming holidaymakers.

About one in four customers that generate revenue for the group are Greek, says Mr. Kimisis. Foreign guests come from all over the world with no heavy concentration from any single area.

Hotel staff members undergo continual training and over the past five years have developed a high level of service skills.

Management says it has succeeded in slicing manpower costs from 70% of revenue to 47%. This year, management intends to lower the cost further still to 44% of hotel revenue.

Total bed capacity at the units is 1,300 and total conference capacity is 2,000 people.

Separately, Mr. Kimisis was honoured last month by the Greek branch of SKAL for his contribution to the tourism industry. SKAL’s Greece president, Yiannis Stefanidis, who is also the chairman of the Hellenic Tourism Organization (EOT), presented Mr. Kimisis with a memorial plaque. Athens Mayor Dimitris Avramopoulous attended the ceremony as did EOT’s general secretary, Evgenios Yiannakopoulos.