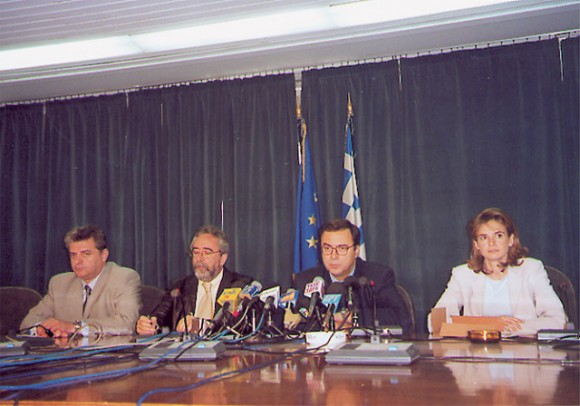 At a recent press call, Development Minister Nikos Christodoulakis said his ministry was, preparing an “Olympic tourism package” that will address several areas of the industry, including existing infrastructure and the quality of tourist services. He stated it would be a strategic policy plan aimed at expanding and improving the tourism sector.

In other developments, Mr. Christopoulakis said a company set up by the Greek Tourism Organization (EOT), to which all EOT properties have been transferred, will likely apply to be listed on the Athens Stock Exchange and may enter the bourse next year. In addition, he confirmed that the state-run Parnitha and Corfu casinos will change to limited companies.

EOT, on the other hand, will be relieved of the many tourism enterprises of had created since its inception – most of which were essential infrastructure projects to promote tourism. The authority’s role will be limit-to its obligations as a state body and the watchdog of the tourism industry. This is in line with the ministry’s decentralization policy, under which local authorities are to take on more responsibilities.

“The state is not able to play the role of entrepreneur,” he declared. Business activities must be carried out in a professional manner by professional people, he said.

Besides the proper utilization of these properties, mostly through long-term lease arrangements to the private sector, the advisor will ready the property company for a stock market listing. The company will be a public multi-stock venture. Similar plans are being discussed for the Parnitha casino.

Concerning the third EU common Support Framework funds, Mr. Christopoulakis said they act as a “strong supportive mechanism for the tourism policies that will follow in the months and years ahead.”

These policies are expected to concentrate on technology upgrades so as each enterprise can increase the quality of products and services offered.

Separately Mr.Christodoulakis, announced a set of measures to be introduced immediately that are designed to boost Greek in the eyes of visitors

A “Greece 2000” pamphlet, to be distributed at all entry points, on ships in planes EOT offices and other sites, will list useful information and tourists’ rights as well as picture reproductions created especially for 2000 of archaeological artifacts. The works, which are being sold for a token sum, can be ordered via post or the Internet and they are sent directly to the buyer. The leaflet also gives details on an new service that collects animals killed in road accidents, a sight which Mr.Christodoulakis noted leaves a very bad impression on visitors.

Another step forward in addressing problems faced by travellers includes the creation of a tourist information and support network called ESTIA (source).

Staff are trained to deal with difficulties visitors may face, particularly those concerning public services.

ESTIA can be contacted on 171. The tourist police and information line (tel 171), which has oftentimes proven a cause for complaint itself, is being upgraded with more staff   and will operate on a 24-hour basis during the tourist season.

Special signs are to posted in taxis providing information and outlining the rights and obligations of both driver and passenger along with fare estimates for common routes. Mr.Christodoulakis did not say, however, that these signs were obligatory.

In an effort to encourage rented room owners to improve the quality of accommodation and services .he said EOT would supply rented room owners with a comments book that is to be made available to guests. At the end of the year, the volumes will be returned to local EOT offices.

Programs for Athens Festival 2001 To be Ready in September