The Hellenic Tourism Organization (EOT) launched its revamped Internet site last month, but admitted there is much work to be done before the site is up to the standards planned by the organization. A brief surf, however, of www.gnto.gr shows some impressive photographs of the country’s natural beauty, albeit with little information.

Yet, the new site does seem to reflect the government’s efforts to develop and promote alternative forms of tourism to potential visitors. But a visit to most subcategories in the activities section produce either a very brief text, a side-bar of links or a “still under construction” notification.

The revamped site, built in close cooperation with the University of Patras, appears organized and easy to navigate, despite its current dearth of detail. EOT’s general secretary, Evgenios Yiannakopoulos, stressed that this was the base site and that much will be added as quickly as possible. 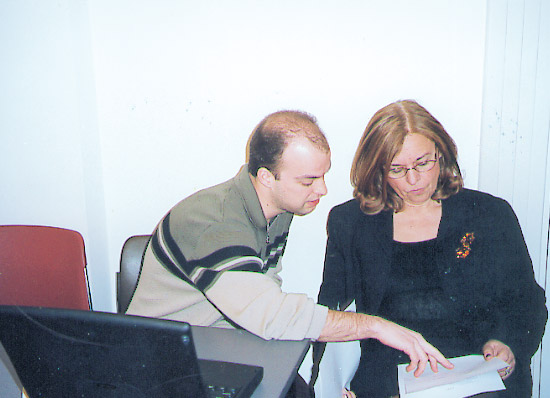 Christos Androutsakis of Patras University with Betty Hadjinikolaou, director of EOT’s research and development directorate, and responsible for the creation and coordination of the organization’s Internet site.

Site information includes, or will soon include, information on all forms of tourism available in Greece, all available tourism data, such as arrival numbers and point of origin; information for tourism enterprises concerning tourism legislation and investment; and news releases and publications by the organization.

Mr. Yiannakopoulos said work on the web pages, presently appearing in Greek and English, should be finished by the end of the year, by which stage translations into German and other languages also will have been incorporated. The site is divided into three sections that offer information on travel, business information and tourism organization itself. Development Minister Evangelos Venizelos reminded that the Internet was not only a medium for relaying stock exchange information, now a popular sport for most Greeks, but also was perfectly suited to promoting the services sector, and Greece’s tourism industry in particular.

Financing for the project comes from the EU’s Second Structural Fund, said Mr. Venizelos and added that the site’s business information section includes the government’s development law, which is designed to encourage tourism investment.

A search facility allows potential tourists to find a hotel in Greece while this capacity is to be extended soon to rented rooms and apartments.

Mr. Yiannakopoulos said that the final stage of this program, which is part of a four-year plan, would allow visitors to access tourist information via computers set up at archaeological sites, museums and other areas around the country. As well, the organization intends to include the introduction of on-line banking through these computer facilities, he said. Initial discussions already have taken place with some Greek banks.