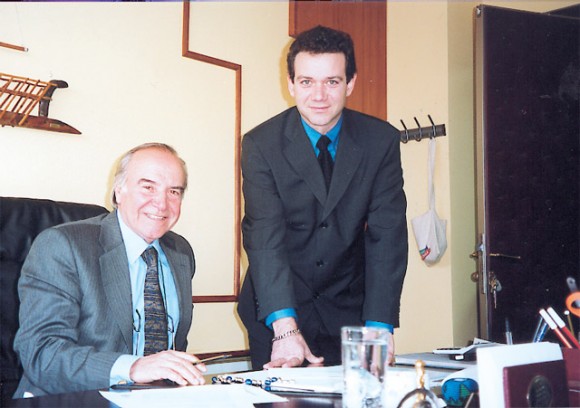 Konstantinos Mitsiou of the Amphitrion group of travel companies does things that few in the local travel industry dare. He has created companies that specialize in specific areas of tourism and opened offices in far-flung areas, such as North America, Japan, and perhaps soon, China. He is also one of the very first agents to get involved in cooperation ventures with other travel offices.

But his most recent move is perhaps the most telling. Mr. Mitsiou hired a professional manager, and one of a very high caliber and an expert in Greek tourism, to oversee his entire operation. Of course, under his direction.

Although he didn’t give a clear answer as to why he embarked on such a major step forward, he implied that he never takes half measures and that the workload was just too heavy. “We were kept so busy last year that I couldn’t spend a few days with my family on Amphitrion Yachting’s Proton, which was and is fully booked.”

This year, with the help of his new professional manager, Nikos Gazelides (Horwath Consulting and former CEO of Olympic Airtours), he may have more free time, but it’s doubtful. Amphitrion continues to grow.

“We will not re-invent the wheel,” says Mr. Gazelides, “but everything is under evaluation. This company is a big company with a great variety of high-level products, but there’s still of lot of possibilities out there that we have yet to explore.”

Mr. Gazelides, for the moment, will concentrate on the group’s organizational structure and fine-tune daily operations.

He will also have to at least follow up new developments within the group – Amphitrion Air Services has taken on the general representation for a Georgian airline and has opened a new store-front subsidiary for promotion in cooperation with a publishing company. And on the back burner, but soon ready to boil over, is the group’s plan to break into e-commerce via the Internet. Then, there are the preparations to be made for the delivery of five new tour coaches this year, which will bring the group’s fleet up to 17, and the plans to increase the group’s presence in China.

If that’s not enough to fill anyone’s plate, there’s more to come. Mr. Mitsiou is seriously looking at a listing on the Athens Stock Exchange – he has been an investor there since the 1960s, and has done well. “A listing on the bourse is an aim that is not, let us say, immediate,” adds Mr. Mitsiou. “A listing is not easy and many steps have to completed before we can reach that stage.”

Another area he finds difficult, but one that must be confronted sooner or later, concerns mergers. He says the group is open to any possibility. For the moment, however, he concentrates on the consortium he helped form to handle travel to the 2004 Games here in Athens.

Meanwhile, Mr. Mitsiou says he keeps his eyes peeled for new products and new markets. “Ideas continue to float around in our heads but we keep out of the clouds and place our feet firmly on he ground.”