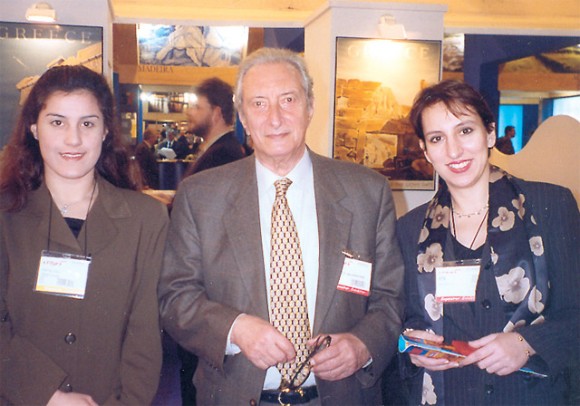 Spain paid tribute to Greece and the Hellenic Tourism Organization during a recent ceremony held in conjunction with Madrid’s travel and tourism fair, Fitur. Guest of honour was the organization’s president, Yiannis Stefanides.

More than 200 directors of major companies from a wide range of fields attended the event, organised by the financial magazine, Actualidad, where Mr. Stefanides received an honorary title.

During his visit to Madrid for the international fair, the EOT chairman spoke with Spanish tour operators, travel agents and journalists. They told him that Greece as a destination has started the year with favourable prospects and that the Spanish traveler expressed a great interest in the country.

This was confirmed through contacts with the chairmen of the Confederation of Latin American Travel Agents (COTAL) and the Federation of Spanish Travel Agency Associations (FEAAV).

Fitur, in the meantime, celebrated its 20th year with new records of participation, which included an impressive representation from the tourist industry of Greece. Twenty leading tourist enterprises from here took space on the attractive exhibition stand of the Hellenic National Tourism Organization. All told, on hand were some one hundred representatives of the Greek travel trade. Greece enjoyed a banner year of tourism from Spain last year, with a new high of more than 97,000 visitors recorded. In 1998, there were some 70,000. Prospects for this year are more than good with an anticipated ten percent increase, according to the EOT representation in Madrid.

The majority of tourists from Spain visit Athens and environs and participate in the classic tour of the mainland. The island preferences of Spanish tourists include Crete, Rodos, Santorini, and Mykonos.

The fair, with a gross exhibition area that covered 100,000 square meters, hosted 7,933 companies from 170 countries and welcomed a record high of 64,350 professionals.