Marina Congress To Be Held In Greece 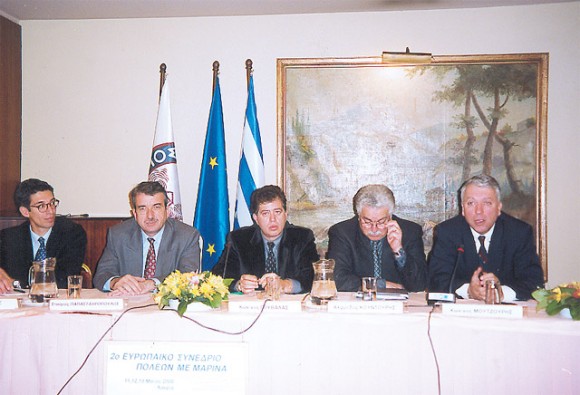 Alexis Kanaris of Europartners; Stavros Papastavropoulous, mayor of Lavrion; Kostas Gouvalas, special secretary at the Greek ministry for development; Alfredos Kountouris of the Hellenic Tourism Organization’s marine development department and a member of the European Association of Municipalities with Marinas’ board of directors; and Kostas Moutzouris, director for marine works.

The second European Congress of Marinas will be held from May 11-13, 2000, and hosted by the municipality of Lavrion, which has one of the largest marinas in Greece. The biennial conference is under the auspices of the Ministry of Development and the Hellenic National Tourism Organization.

Delegates to the conference will include mayors from cities in Europe with marinas as well as from private sector companies involved with yachting.

During the conference, delegates will discuss ways to fund marine construction and the best ways to operate modern marine facilities. Discussions will also center on the importance of marinas to tourism in general and to the possibilities a marina offers to a community’s cultural and economical activities.

The first similar congress was held in Portugal in 1997, after which the European Union of Municipalities with Marinas was formed. The basic aims of the association are to promote cooperation and support among European municipalities that have marinas. At each meeting, members have the opportunity to discuss common problems that result from the planning, construction and operation of marinas.