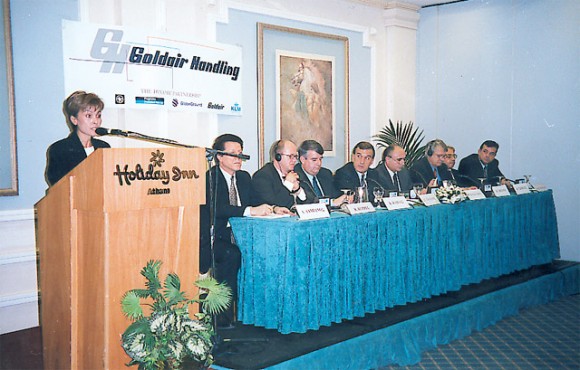 Stelios Golemis, head of the Goldair group, is set on placing his company on the top of the list of Greek tourism enterprises. Within the past few weeks, he has promoted his ground-handling subsidiary and enlarged that company’s customer base with the addition of some of Europe’s largest airlines and Greek private airlines.

With the completion this year of the new Eleftherios Venizelos International Airport at Spata, just outside of Athens, Greece enters a new economic phase. According to Stelios Golemis, the new Spata airport gives the country the capacity to become a hub airport that links the countries of the eastern Mediterranean, the Middle and Far East with Europe.

At a recent press conference, where he introduced partners in Goldair Handling, Mr. Golemis asserted that European airports have reached the saturation point where they cannot expand any further in order to deal with the increased air traffic. Mr. Golemis said it should be recognized that Greece’s new facility could help meet that need. Meanwhile, his airport ground handling company, the first such private enterprise in Greece after the sector was liberated, continues to build on its strong base of airline customers. The most recent additional is Axon Airlines.

Goldair Handling will look after all of Axon’s ground handling services for all its flights at both the airports in Athens and Thessaloniki. The airline executes four daily flights to Rome, Milan, Paris and Brussels with new Boeing 737-700 passenger jets.

Separately, Mr. Golemis also took the first step to expand his tour operation with the recent purchase of a 25% stake in the Cyprus tourism enterprise Amathus Hellas by his Athens-based subsidiary Goldair Tours.

The Cypriot company says Goldair could increase its stake in the company shortly when Amathus, which is listed on the Cypriot stock exchange, carries out a capital increase.

Amathus began operations in the spring of 1998 and concentrates on tourism services and travel packages.

The company also represents Olympic Airways in Cyprus, as well as the British airline Air 2000.